It is repeatedly claimed by conservatives that ‘so-and-so is satanic,’ as liberals continue and push on with their destruction of the moral foundations of the western world. To liberals, this may come off as hard to accept, while others will boast of its accuracy, nonetheless, this article will prove how the liberal moral worldview is entirely adopted from satanism.

While gender dysphoria becomes institutionalized, career criminals like George Floyd are elected to saint status, and Churches across the western world repeatedly ‘spontaneously combust’ with little to no inquiry into who might have lit them ablaze, the claim that what is happening around the world is ‘satanic,’ which to many is thought to be hyperbole, is far more accurate than those who make the claim might understand.

The Satanic Temple is the single most popular satanic organization in the world, with dozens of chapters throughout North America, Europe & Australia.

The Satanic Temple is a tax-exempt ‘religious’ organization, meaning it is recognized as a religious organization by the U.S. government, granting the organization — and their beliefs — specific legal protections.

Abortion, for instance, which has been widely adopted as one of the single greatest issues motivating liberal & democrat voters worldwide, is not only a concern for the Satanic Temple, it is one of their religious rituals, which according to them, grants the organization immunity from new regulation set to inhibit its frequency.

Now that you have read the seven foundational tenets of the Satanic Temple, we will go through each one of them, providing recent and relevant examples of the democrat party, and more broadly, how the motivations of liberals, generally, wholly align with the fundimental beliefs of satanism.

Due to vague wording, the first tenet of the satanic temple can be interpreted in many ways, as the reader is prompted with suggestive language like the word ‘should.’ This tenet of the satanic temple likens man to all creatures, acting as an equity program of sorts for all creatures, diminishing man’s place in the world, likening him to an animal.

The idea that man is not special, plays into the hands of ‘climate justice’ organizations who’ve set out to limit man’s accomplishments in the name of climate welfare. This of course has animated liberal voters from around the world, setting them out into the streets and shuffling into the voting booths.

Vegans understand this very well, as satanism flourishes within alternative diet communities such as veganism, as highlighted by an article published by TheReasonedVegan.

The second tenet of the satanic temple explains how the concept of ‘justice’ supersedes law and institutions. This is where the phrase “No Justice No Peace” originates.

We have seen this way of thought in protest movements such as Black Lives Matter and Antifa, who act with impunity. During the violent riots of 2020 where these groups inflicted hundreds of millions of dollars in property damage, murdered dozens of innocent individuals and assaulted countless others, the battle cry was ‘justice.’

Similarly, judges and prosecutors whose political dispositions align with such groups take the law into their own hands, releasing these same rioters back out into the streets without even a slap on the wrist. This too is done in the name of a new idea of ‘justice’ that supersedes the legal definition of the term.

This tenet of the satanic temple explains that a man or woman may do whatever they please with their own body, with this ‘right’ never to be broken, infringed, or dishonored.

This belief of course is found in the liberal slogan of “My Body My Choice,” which has become the official battle cry of abortionists and their allies.

Abortion, which is a religious ritual within the satanic temple, has been adopted as a foundational motivation for liberal voters around the world.

The fourth tenet of the satanic temple, of course, has not aged well, as freedom around the world has crumbled during the age of mass-online censorship and COVID regulation. Though, just as with the new concept of ‘justice’ and how it supersedes laws and institutions, the new idea of ‘freedom’ espoused by the satanic temple is designed to apply only to those whose beliefs align with theirs.

When a homosexual couple asked a Christian baker to bake them a cake, she refused, prompting the couple to take the bakery to court. Unbeknownst to the baker, the fourth tenet of the satanic temple had been broken.

The ‘freedom to offend’ applies solely to their own ideas of what is or is not offensive. This is where the concept of ‘words equal violence’ has gained ground. Today, the freedom to offend applies only to liberals, while conservatives and Christians are not granted such graces.

This is precisely where the liberal slogan of “TRUST THE SCIENCE” originates.

In an article posted by TheGuardian titled “Devil’s advocate: are satanists now the good guys in the fight against the evangelical right?” the argument is made that satanists are the rational trusters of science, prompting praise from liberal news outlets from around the world.

When the Child Evangelism Fellowship set up the pro-Christian Good News clubs in US public schools, the Satanic Temple introduced its own After School Satan clubs – promoting scientific rationalism.

It cannot be understated how mainstream media outlets are suggesting satanists are now ‘the good guys.’

The sixth tenet of the satanic temple speaks directly to the liberal worldview of apologizing for perceived past ‘injustices’ such as colonization or slavery. This is where the idea of reparations got its wings.

Reparations have become a key battle cry of liberal voters, animating the black populace within the United States of America to demand payment for perceived injustices of the past. Liberal politicians and lawmakers are using this call for reparations as a voters issue and campaign promise.

This idea has also become institutionalized in children’s classroom curriculum with classes such as critical race theory, which seeks to place blame on children for the alleged actions of their ancestors.

This concept has been further institutionalized within the justice system, with politicians, judges, and prosecutors seeking to change laws and to give minorities special status, which supersedes that of their Caucasian neighbors.

This is where the concept of ‘facts don’t care about your feelings’ has failed to negate the widely adopted liberal belief that “Feelings Don’t Care About Your Facts.“

Every ‘liberal freakout’ video you have ever seen on youtube is textbook Demonic Possession, and it is foundational to the beliefs of satanists. The seventh tenet of the satanic temple institutionalizes and encourages a disregard for fact, replacing it with feelings of compassion, the new concept of justice, and the arrogance of ‘trusting the science.’

demonic possession: the supposed invasion of the body by an evil spirit or devil that gains control of the mind or soul, producing mental disorder, physical illness, or criminal behavior. Many forms of physical and psychological illness were formerly attributed to such possession, notably epilepsy, schizophrenia, and Tourette’s disorder. The traditional remedy for possession was ritual exorcism.

If you go to youtube a search ‘liberal freakout’ you will find countless videos of screaming liberals who were simply confronted with reality. They become uncontrollably emotional to the point of psychotic breakdown, many times resulting in violent physical altercations.

As you can see, the seven foundational tenets of the satanic temple align perfectly and harmoniously with the modern liberal, and in many cases is acknowledged and promoted by the mainstream media.

The assertion that liberals are demonically possessed, or ‘satanic’ is not hyperbole. Whether they know it or not, their beliefs align with the foundational tenets of the satanic temple.

If this is the first time you are learning this, it would be wise to continue reading into satanism and how the cartoonish depiction of black candles melting over skulls was carefully promoted to sneak actual satanism (what you have seen above) in through the back door.

1 Peter 5:8 – Be sober, be vigilant; because your adversary the devil, as a roaring lion, walketh about, seeking whom he may devour:

1 John 3:8 – He that committeth sin is of the devil; for the devil sinneth from the beginning. For this purpose the Son of God was manifested, that he might destroy the works of the devil.

2 Corinthians 11:14 – And no marvel; for Satan himself is transformed into an angel of light.

John 8:44 – Ye are of your father the devil, and the lusts of your father ye will do. He was a murderer from the beginning, and abode not in the truth, because there is no truth in him. When he speaketh a lie, he speaketh of his own: for he is a liar, and the father of it.

James 4:7 – Submit yourselves therefore to God. Resist the devil, and he will flee from you.

2 Corinthians 11:3 – But I fear, lest by any means, as the serpent beguiled Eve through his subtilty, so your minds should be corrupted from the simplicity that is in Christ.

Romans 16:20 – And the God of peace shall bruise Satan under your feet shortly. The grace of our Lord Jesus Christ be with you. Amen.

Revelation 12:9 – And the great dragon was cast out, that old serpent, called the Devil, and Satan, which deceiveth the whole world: he was cast out into the earth, and his angels were cast out with him.

Ephesians 4:27 – Neither give place to the devil.

Ephesians 6:11 – Put on the whole armour of God, that ye may be able to stand against the wiles of the devil.

Revelation 12:9-12 – And the great dragon was cast out, that old serpent, called the Devil, and Satan, which deceiveth the whole world: he was cast out into the earth, and his angels were cast out with him.   (Read More…)

Matthew 16:23 – But he turned, and said unto Peter, Get thee behind me, Satan: thou art an offence unto me: for thou savourest not the things that be of God, but those that be of men.

Ephesians 6:12 – For we wrestle not against flesh and blood, but against principalities, against powers, against the rulers of the darkness of this world, against spiritual wickedness in high places.

2 Corinthians 4:4 – In whom the god of this world hath blinded the minds of them which believe not, lest the light of the glorious gospel of Christ, who is the image of God, should shine unto them.

Luke 10:18 – And he said unto them, I beheld Satan as lightning fall from heaven. 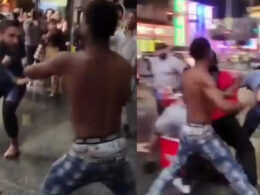 A shocking cell phone video captured a brutal mob assault of a tourist along the Hollywood Walk of Fame. According to the…
byDaily Veracity Staff
No comments 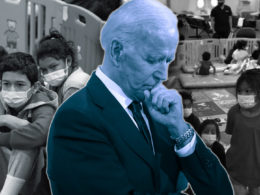