Following the trend of major individuals, companies, and organizations distancing themselves from Ye at the behest of Jewish people, two prominent athletes have terminated their relationship with Ye’s representation team, Donda Sports. Aaron Donald, who is arguably one of the greatest football players of all time, and Jaylen Brown, a young star for the Boston Celtics, both released official statements on Tuesday condemning Ye’s DEFCON 3 tweet and announcing their split from Donda Sports. The reach of Jewish influence in America appeared to have just been limited to media, politics, finance, banking, entertainment, fashion, and music, but it seems now that professional sports are not impervious to it either.

There are a couple of points worthy of addressing in this situation. If there was any debate regarding the hierarchy of protected classes in America, consider it dead. Ye, arguably the most prominent and influential black man alive today, stood no chance against the crushing weight of high-status Jews and the far-reaching power and influence they wield across all major functions of society. Additionally, it is yet to be seen if any other influential black people will have Ye’s back as he is canceled left, right, and center. Candace Owens and Jason Whitlock have offered some defense, but it has been largely impotent, and the truth is, they are not nearly influential enough to tip the scale of public opinion in Ye’s favor. Now, even black athletes, our based, masculine professional athletes, crumble against the looming specter of Jewish retaliation and being deemed sympathetic to an alleged antisemite. Optimistically, however, for people on the outside willing to analyze this situation objectively, a lot can be learned.

There is no longer any dispute regarding the minority group most sacred among us. Denigrate LGBT, maybe you will get banned from Twitter. Denigrate black people, maybe you will lose your job. Denigrate Jewish people, and you will be disassociated from, smeared, and essentially un-personed from society, regardless of your wealth, status, or race. Funny enough, the word ‘denigrate’ might not even be fair to Ye in this case. What statements did Ye specifically make about Jewish people that were derogatory, insensitive, or over the line? In all the recent podcast appearances and interviews, Ye has only remarked about his negative lived experiences working with elite members of the industries he resides in. He also mentioned that they were Jewish. Based on these experiences, Ye, of clear heart and mind, believes there are Jews running media, entertainment, and parts of government.

First of all, it would be wrong for Ye to not speak what he believes to be the truth. Ye should actually be considered a reliable, primary source due to his proximity to some of the most influential people in America. It is crucial and refreshing, frankly, that someone like Ye was brave enough to speak for everyone else who in the most literal sense cannot afford to do so. Additionally, Ye did not say “Jews run the media, which means”… or “Jews run the media, and therefore…” He merely proclaimed, based on experience that many people in important positions in this country are not operating in good faith, and they happen to be Jewish. Nothing more, nothing less. This is what provoked an entire country (they would like you to believe), to turn on him overnight.

If enough people had not piled on already, two of the biggest stars in the NFL and NBA tucked their tails between their legs and stabbed Ye in the back on Tuesday. Aaron Donald of the Los Angeles Rams and Jaylen Brown of the Boston Celtics both released official statements on Tuesday explaining their decisions to leave Donda Sports over antisemitism, or something like that. A week had already passed since the infamous “Drink Champs” interview that ignited much of this, but the antisemitism must have taken a while to truly sink into the minds of these two African-American athletes. This was a decision surely made in good conscience and not while under duress by Jews and the most famous athlete, LeBron James. James, who famously produced an Instagram video of himself a couple of years ago referencing “Jewish money”. James quickly apologized once the video made headlines. Additionally, it’s ironic that antisemitism was the straw that broke the camel’s back for Jaylen Brown. Brown plays in Boston, and with no way to verify this, the n-word probably gets said more by white people in Boston than in any other city in the country, not in Arkansas, Mississippi, or Louisiana. But talking about Jews is crossing the line, apparently.

The point is, Brown and Donald’s departure from Donda Sports is obviously hollow and cowardly. This does not occur if Chase Bank, Adidas, Foot Locker, etc. do not cancel Ye first. The moral of this story is that professional athletes can never be seen as thoughtful, brave, or nuanced individuals, no matter how hard someone like Kareem Abdul-Jabbar (real name is Lew Alcindor) tries. Undoubtedly, professional athletes are impressive in the capacity that they are capable of physical feats ninety-nine percent of the world could only dream of doing. Other than that, they are no different than Bob in the cubicle down the hall. When an athlete is being clearly astroturfed in the media for something profound, like complaining about police officers arresting black people, please do not put any stock in this and just walk the other way.

A perfect example of why we should always be apprehensive of athlete worship is Kyrie Irving. Kyrie Irving gained some notoriety in right-wing circles as of late due to his anti-vax stances and reposting of Alex Jones clips. He was always known to be a bit of a contrarian, but these recent views landed Irving in the good graces of the usual suspects online (Steven Crowder, etc). The problem is, people who are paying close attention to sports tend to be rather closed-minded. Crowder, like many others, was either unaware or couldn’t be bothered to know that Irving is a total BLM shill, who purchased a home for George Floyd’s family. Floyd, who died of a fentanyl overdose and whose life of crime could not support the family he was estranged from in the first place.

Irving, Aaron Donald, Jaylen Brown, and athletes, in general, should never be relied on to take a courageous or nuanced stance on anything. Just a good rule of thumb to live by. This is an obvious rule as well, but sports are addicting and men of all ages can easily fall into the trap of obsessing over and putting athletes on some kind of cultural pedestal. Athletes are not ‘based,’ and are just as susceptible as anyone else to the latest fake media nonsense.

We truly are fortunate that someone like Ye exists; not only for his transcendent talent and creativity in music and fashion but for his willingness to speak a truth once considered to be forbidden by those rich or poor, famous or unknown. It still remains to be seen whether Ye’s actions will induce censorship the likes of which we have never seen, or inspire prominent truth-tellers to come forward in droves. Praying for the latter. 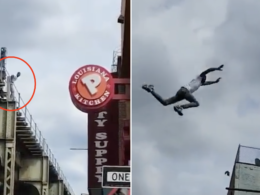 Police are seen attempting to apprehend the suspect who jumps from rooftop to rooftop. It is unclear what…
byJill Schrider
No comments 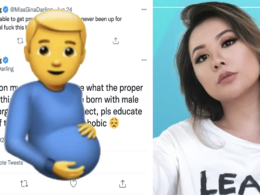 These people are real and they vote. An L.A.-based media personality named gina Darling was attempting to make…
byJill Schrider
No comments 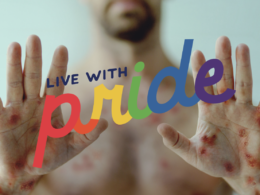 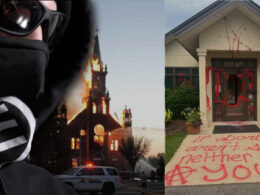 The Department of Homeland Security (DHS) released a memo in May, warning of violence coming from the far-right…
byDaily Veracity Staff
No comments